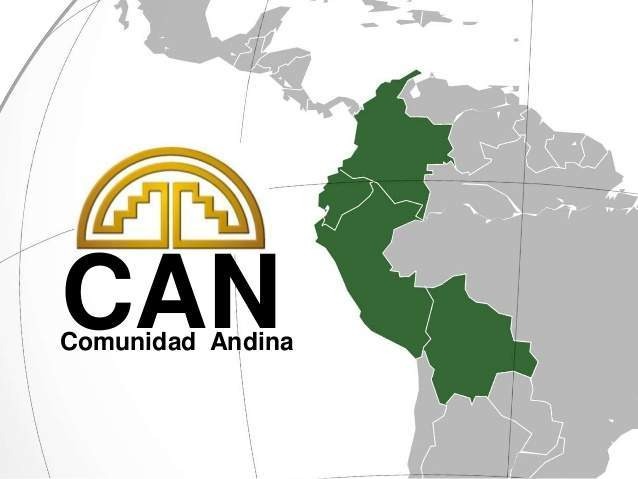 The Andean Community of Nations (CAN) is a regional organization of 4 countries, which have a common objective: to reach an integral, more equitable and autonomous development through Andean, South American, and Latin-American integration. The community was founded in 1969 and is currently made up by: Colombia, Bolivia, Ecuador, and Peru. Before 1996, it was known as the Andean Agreement or Andean Group, to which even Venezuela belonged to until 2006, during the government of Hugo Chavez, and Chile until 1976, who withdrew during the military regime of Augusto Pinochet due to incompatibilities between this country’s economic policy and the CAN’s integration policies.

Located in South America, the 4 Andean countries jointly have more than 110 million people, a surface of more than 4.000.000 kilometers, and a Gross Domestic Product estimated at more than US$700 billion dollars.

Now, from an Intellectual Property point of view, Decision 486 from 2000 and posterior modifications, establishes parameters through which aspects such as trademarks, patents, industrial designs, and unfair competition are regulated for the member countries of the Andean Community of Nations (CAN), that is, Colombia, Peru, Ecuador, and Bolivia. From a practical point of view, a businessman may, for example, register a trademark in Colombia and oppose the registration of an identical or similar trademark in Ecuador, Peru, or Bolivia. This facilitates, in an efficient manner and at a lower cost, managing a trademark portfolio in the Andean region, since a right granted in one country has impacts in other countries of the region, and in this way the businessman avoids having to protect his trademark in the 4 countries that belong to the CAN, with the economic investment that this implies. Nonetheless, it is important to take into account that this principle does not mean that each Trademark Office has access to the others’ databases and therefore performs an “official” verification, but instead the titleholder of the corresponding trademark has to look after his/her trademark in an efficient manner to detect an equal or similar published trademark in another country, and take advantage of the opportunity to oppose this through an “Andean opposition” to a registration, in case of considering that this could cause a risk of confusion in the market.

On the other hand, Decision 486 does not recognize that, if in one country the Notoriety of a brand is declared, it will automatically be recognized in the other CAN countries. Nonetheless, the Decision does grant validity from the evidentiary point of view; for example, to the registration trademark certificates in CAN countries, when the Notoriety declaration of a trademark is requested in Colombia, registrations can be provided that were obtained from Bolivia, Ecuador, and Peru for purposes of demonstrating the recognition of the mark. This does not mean that this is the only evidence required to obtain the recognition of the notorious character of the trademark, but it does constitute important evidence within this type of process.

Lastly, I would like to call attention to the “trademark co-existence agreements” that are regulated by article 159 of the Decision. Through this disposition, the execution between trademark titleholders is permitted for co-existence agreements as the only possibility to market goods or services, in the assumption that within the CAN there are registrations on an identical or similar trademark under titleholders of different names to distinguish the same products or services. This means in general terms that there could be, for example, two companies with the same trademark, one to offer clothing in Peru, and the other to market cosmetics in Colombia. The main objective of the mentioned article is to facilitate free trade within the CAN, no matter if in two different countries of the mentioned community, said products are marketed under two equal trademarks. However, the power over the decision to register the trademarks lies with the Trademark Office in each country, and whose function is not limited to a single subscription act, and this possibility is established as an alternative mechanism that does not exclude alternative negotiation mechanisms, such as the limitation for coverage of products or partial waivers to rights that allow equal or similar trademarks from different titleholders to converge in the same market, as is the concrete case of the CAN, without the risk of confusion or association for the consumer.